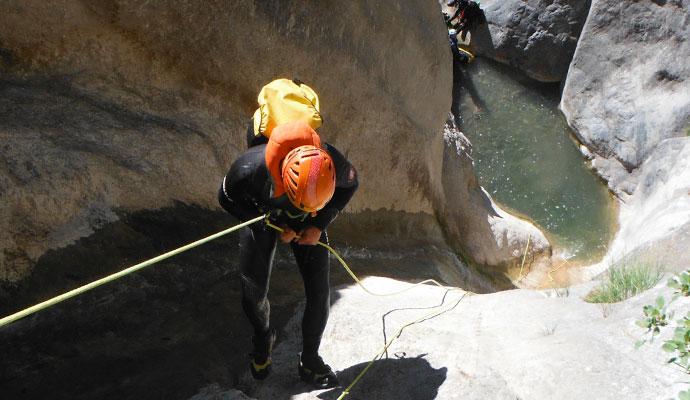 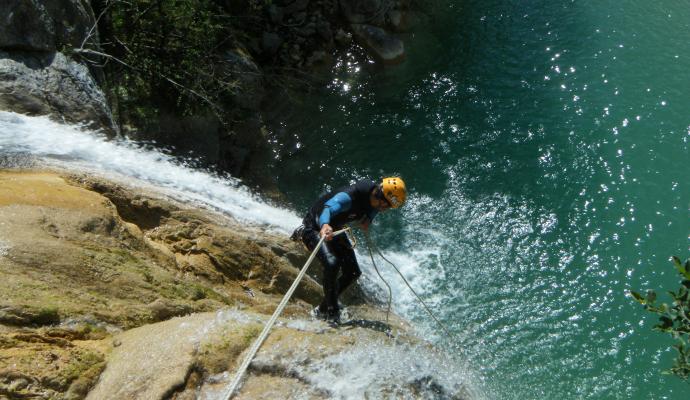 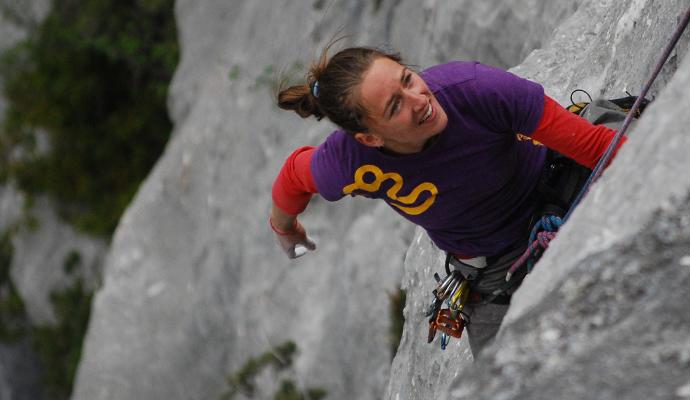 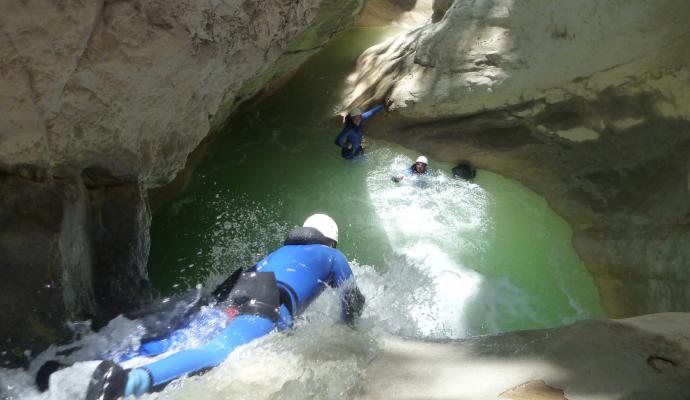 Welcome to the O’limpide website.
Located in the village of Castellane in the Alpes de Haute Provence, our team will be happy to escort you in your discover of the Gorges du Verdon and the region.

Here are the different activities and trails we offer. Come and share our love of sport and nature.

Canyoning Verdon and canyoning in Castellane

Based in Castellane in the Alpes de Haute Provence, our team of qualified instructors will show you the most beautiful canyoning trails of the Verdon Gorges and the Castellane area.

From beginners, looking for an initiation, to confirmed athlete willing to improve his technique and knowledge in sports canyons, we offer a wide selection of itineraries tailored to your desires and experiences.

Usability and security are our watchwords and we guarantee unforgettable moments.

If you want to share new sensations with us do not hesitate any longer to book your activities. If you need more information, you can contact us by mail or by phone.

You will find a detailed fact sheet for each trails we cover indicating the difficulty, duration, the meeting spots and the equipment provided and expected for the activity.

Enjoy our half-day canyoning trip on the Haut-Jabron initiation trail (canyoning in Castellane) as well as the sportier canyon of Saint-Auban (canyoning in the Verdon).

We hope you will enjoy your visit on our website and to meet you in the Verdon Gorges very soon!

You will find extensive information on this fabulous playground and our canyoning, climbing and via ferrata activities. 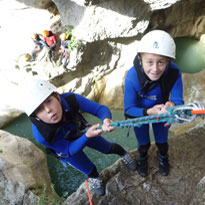 Learn about the joys of canyoning in the canyon initiation clue Haut-Jabron in the Castellane area. 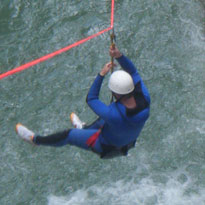 Canyoning in the Verdon 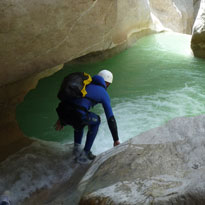 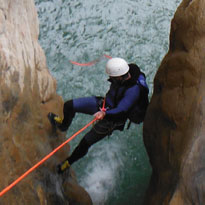 Discover the wilderness of Canyon Val d'Angouire at Moustier in the Verdon Gorge.

Castellane is a French town, sub-prefecture of the department of Alpes-de-Haute-Provence, located in the region Provence-Alpes-Côte d'Azur

With about 1 700 inhabitants, Castellane has the peculiar characteristic of being the least populated sub-prefecture of France.

The people of Castellane are called Castellanais. 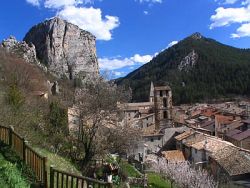 The municipality of Castellane is a very old city implanted upstream of the Verdon Gorges.

The village is 724 meters above sea level. The city include 2 water reservoirs:

Two canyons are located in the territory of Castellane:

The GR 4 (hiking trail) passes through the town and allows to reach the village of Chasteuil. 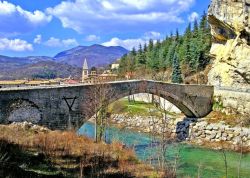 From prehistory to antiquity:

The city of Castellane is populated since a very long time. Its East Region has been first frequented by nomadic peoples during the Neolithic Period.

Following the Roman conquest, houses settled in the Valley of the Verdon and the city is called "the city of the salt merchants". Then, it will be attached to the Roman province of Alpes-Maritimes.

The people of the city domiciled on the banks of the Verdon in order to exploit the salted sources that we can still see today.

A bishop is created in the fifth century: he transferred to Senez in 1061 and will remain there until his removal, during the French Revolution.

Period of the Middle Ages:

In the early-ninth century, all the area around the current town of Castellane was inhabited by only 84 people. To protect themselves from invasions, inhabitants shifted to the top of the Rock which dominates the valley of the Verdon, and on the terraces below the Rock. Some vestiges of this site of Castellane are still visible. For practical reasons, the people then settled at the foot of the Rock in the bottom of the valley.

In 1189, Baron de Castellane Boniface III was attacked by his lord Alfonso I of Provence whom he refused the honour, and must forfeit. Another war broke out between the Baron and Count of Castellane in 1227. In 1262, Charles I of Anjou submitting Boniface of Castellane. In the thirteenth century, the family of Castellane lost possession of the city in favour of the Counts of Provence, and Baillie was installed. To protect themselves from these attacks, in addition to the protections specific to the city, the Castellane build a series of fortified outposts: to Demandolx in custody, Chasteuil, Rougon, and perhaps Taloire.

The Black Death reached Castellane in 1348, and was followed by a devastating flood of Verdon. In 1390, Raymond de Turenne ravaged the surrounding territory and the village of Taulanne, but failed to take the city, but by destroying the wooden bridge over the Verdon River. In the middle of the fifteenth century, the high village is completely abandoned in favor of that of the lowland site.

The bridge was already in the Middle Ages and is built of stone from the fifteenth century. A house of the priests brothers took charge of its maintenance. The bridge on the Place Castellane was frequently used for routes between the Mediterranean.

In the fifteenth century, a community settled on the present site of Taloire.

Provence was attached to the Crown of France in 1483, and Louis XI shaved the castle. In 1486, the consulate was vested in Castellane, which could administer itself.

The seventeenth to the eighteenth century:

At the same time, Bishop Jean Soanen tried to make celebrations more measured but the youth of the town was used to celebrate with drum music and gunshots. They refused and resisted, preventing the procession of the Blessed Sacrament out of the church.

During the year 1760, a tax levied by the king on the sale of cloth leads to a decline in textile production in the village.

Until the Revolution, two salty rivers were used to produce salt, with salt marshes.

Before the French Revolution, there were several hamlets in the present territory of the city of Castellane.

During the French Revolution:

The storming news of the Bastille fall is welcomed, this event announcing major changes in the organization of the country.

The news quickly spread and a phenomenon of fear seizes France. Rumors of thousands armed men paid by the aristocrats and destroying everything in their path spread very quickly and caused panic. The Great Fear, coming from the town of Digne-les-Bains, reached Castellane around 31 July 1789 and then spread towards the Var valley.

During the nineteenth century:

The cloth industry, well established since the previous century, prosperous until the mid-nineteenth century.
But then, home businesses are replaced by the Barneaud factory. It employs 9 workers in 1872, and then disappears in 1878.

In 1926, the sub-prefecture is deleted, then restored during the Vichy regime in 1942.
The city of Castellane is released by a British infantry division August 18, 1944.
An earthquake take place in 1951 in the hamlet of Taloire.

After World War II, several towns are linked to Castellane